It advertises a firing range of up to ninety feet (twenty-seven meters). Despite that, and like other re-released Elite XD blasters, it features the same performance as its original counterpart.

The blaster was first seen at the 2014 Toy Fair, along with the rest of the Elite XD re-releases.

Two Elite XD Strongarms are included in the re-release of the Strongarm 2-Pack. 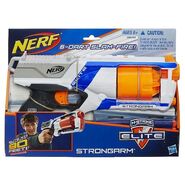 The United States Elite XD packaging for the Strongarm. 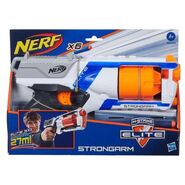 The European Elite XD packaging for the Strongarm. 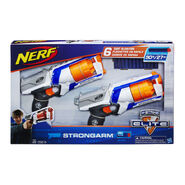 The Elite XD Strongarm 2-Pack, no longer claiming it as Elite XD, but still retains its ninety-foot range claim. 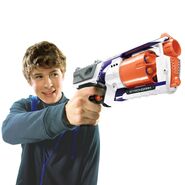