The Strikeblade is a Nerf melee weapon that was released in 2014 under the Zombie Strike series.

The Strikeblade has a shape, size and paint job similar to that of the N-Force Vantage Sword. Its color scheme matches the style of the Zombie Strike blaster line. It is meant to be a silent, discrete method of attacking zombies.

It was first discovered at the 2013 San Diego Comic Con event.

The Strikeblade has been released with the following color schemes:

A green and orange Strikeblade was sold with a Crosscut in a Kmart exclusive value pack known as the Crosscut and Strikeblade 2-Pack.[citation needed]

The packaging of the Strikeblade. 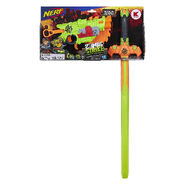 The Crosscut and Strikeblade 2-Pack.
Add a photo to this gallery

Retrieved from "https://nerf.fandom.com/wiki/Strikeblade?oldid=189473"
Community content is available under CC-BY-SA unless otherwise noted.