A Streamline Dart, later renamed Clip System Dart, is a type of Nerf dart that was released in 2006 under the N-Strike series.

Streamline Darts feature a rubber, "streamlined" dart head and a long orange body. They are meant to be "universal" darts, used with clip system blasters. Their size and shape allows them to be loaded into clip system clips and drums, which can be interchanged between various compatible blasters.

They are notorious for having an inconsistent firing accuracy, due to a long rubber stick in the foam body, as well as having a hollow dart head. The darts become softer with use, to the point that overused and broken Streamline Darts are known to jam up blasters and make them very hard to use. Dart posts are also infamously known to "mutilate" and "impale" bent darts. Sometimes, longer dart posts even prohibit the use of the Streamline Dart, as its rubber stick prevents the post from being inserted properly into the dart.

The Streamline Dart was first introduced with the Longshot CS-6 in 2006, the first blaster to use the modern clip system.

In 2012, the Streamline Dart began to be replaced by its successor, the N-Strike Elite Elite Dart. This dart is also compatible with the clip system, but has a shorter rubber stick, allowing it to be used in blasters with longer dart posts.

Streamline Darts have been released in the following color schemes:

Modified Streamlines often fix inaccuracy problems. One of the most popular modifications for the Streamline Dart is to cut an opening on the dart head and fill it in with hot glue. This will increase the range of the Streamline by about ten feet.[citation needed] However, it also causes more pain when someone is hit by one, due to the fact that the dart head is no longer hollow. 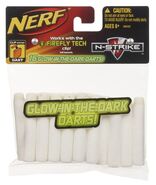 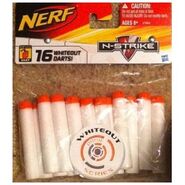 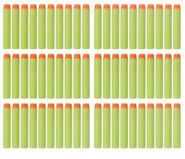 The Gear Up variant of the Streamline Dart.