The Stonewall Shield & Sword is a Nerf weapon that was released in 2010 under the N-Force series.

The Stonewall shield is the main item featured in this pack. It is small, but sturdy, being made out of mostly plastic with some foam on the edges. It has a handle on the back made of a Velcro strap that can be adjusted. Many fans modify it to have a sturdier handle. It can be painful for the wielder to use as a bashing weapon because the wielder's arm hits the plastic, rather than the surrounding foam.

The Stonewall sword is the other part of the pack. It is made out out of the same flimsy foam as the Thunder Fury Short Sword with a hollow plastic rod in the center for stability. It is only one foot long and, due to its size, it can be considered a secondary/backup weapon. Despite being called a sword, its size and shape make it more akin to real-life machete or large knife. It features a jagged edge on both sides. The sword can be used as a throwing knife if the user knows how to throw it. A common modification is to weight the handle of the sword, which allows it to be thrown much more effectively. 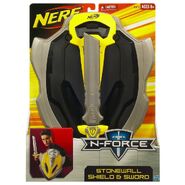 The packaging for the Stonewall Shield & Sword. 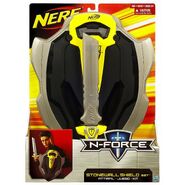 The packaging for the Stonewall Shield Set.
Add a photo to this gallery

Retrieved from "https://nerf.fandom.com/wiki/Stonewall_Shield_%26_Sword?oldid=189151"
Community content is available under CC-BY-SA unless otherwise noted.