The Stealth Ambush is a BOOMco. blaster that was released in 2014.

The Stealth Ambush is a Qwikclip-fed blaster. It features multiple hidden parts; two wing-like dart holders on either side of the blaster and a pop-up firing chamber on top of the blaster. It also features one accessory rail and three sling points.

The firing chamber is a separate part of the blaster and is primed independently. It has three barrels that fire when the chamber pops up, with the darts flying in a shotgun-like effect.

It advertises a firing range of up to fifty feet (fifteen meters).[1]

To reload the Stealth Ambush, stick eight Smart Stick Darts into the included clip. Insert the clip into the blaster until it locks into place. To fire, pull the black handle back and push it forward to launch a dart.

To reload the Stealth Ambush's pop-up firing chamber, stick three darts into the three muzzles on the front of the chamber. Push it back down and lock it in place. Pull the priming bar at the back of the chamber to prime the blaster; the handle should lock rearwards. Pull the Stealth Ambush's black handle back and push it forward to force the firing chamber to pop up and fire. 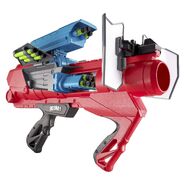 The Stealth Ambush with its dart holders, second barrel, and Smart Stick Shield deployed.
Add a photo to this gallery

Retrieved from "https://nerf.fandom.com/wiki/Stealth_Ambush?oldid=188984"
Community content is available under CC-BY-SA unless otherwise noted.