Nerf Wiki
Register
Don't have an account?
Sign In
in: Articles to be split, Zuru blasters, X-Shot blasters,
and 7 more

The Stealth is an X-Shot blaster that was released in 2011.

The Stealth was released as a competitor to the Nerf Nite Finder EX-3, being a similar size and having a similar function. This blaster, alongside the other blasters in the original X-Shot line, fires both darts and water. The darts and water are both fired by pulling the trigger and can be fired at the same time.

The blaster itself has a comfortable handle and firing trigger, and the priming mechanism on the blaster mirrors that of a Nite Finder EX-3 or an Element EX-6. On the top of the blaster is a makeshift rail, although no accessories have been released in the X-Shot line that would be compatible with said rail. There is an ammunition storage area in the front of the blaster that holds up to four darts at once. The water is stored in a clip, which can be removed by clicking the clip-release button on the left side of the blaster. The darts and water come out of separate areas at the front of the blaster and not the same barrel.

This blaster was one of the first three blasters to be released under the X-Shot line in 2011, alongside the Sidewinder and Thundershot. It was carried over to the Air Zone brand with no changes to name or performance.

In late 2013, three new X-Shot lines were introduced (X-Shot Excel, X-Shot Girl, and X-Shot Zombie), consisting of some re-released versions of previous X-Shot blasters as well as new blasters. The Stealth was one of the few blasters not to make an appearance in any of the lines, which may indicate it has been dropped from future plans. This may not be the case, however, as the Stealth was re-released in 2013 with updated internals and claims of sixty-five ranges. 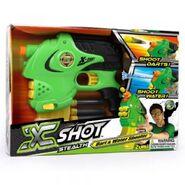 The packaging for the Stealth.
Community content is available under CC-BY-SA unless otherwise noted.