The Star Shot is a Nerf blaster that was released in 2014 under the Rebelle series. It requires two "AAA" batteries to operate its integrated light.

It comes packaged in the Star Shot Set and cannot be purchased separately.

The Star Shot is a single-fire blaster very similar to the Pink Crush. It is advertised as a "crossbow blaster", featuring faux bow arms and a cord that connects those to the priming mechanism; this can be detached from the plunger rod and do not affect the way the blaster is primed.

Similar to the N-Strike Elite Firestrike, it features an integrated light that is powered by a small trigger under the main firing trigger. It also has a single tactical rail, but is molded separately instead of part of the shell unlike how the Firestrike is built. The bow arms themselves hold up to six additional darts.

The Star Shot was first discovered alongside the Star Shot blaster set in December of 2013.[1]

The Star Shot has been released with the following color schemes:

The blaster shares a very similar design to the Pink Crush externally. Internally, it is more like the Firestrike, featuring similar but stronger internals, accessories, and a near identical mold. The rear grip uses a closed arched geometry with the spring plate molded in with the grip, allowing for a very rugged feel. The plunger rod is made of a higher density polyethylene than the Firestrike, allowing much more modability and sustained long life. 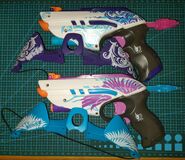 Both variants of the Star Shot side-by-side.

The one piece closed arched trigger catch and grip of the Star Shot.
Add a photo to this gallery

Retrieved from "https://nerf.fandom.com/wiki/Star_Shot?oldid=211074"
Community content is available under CC-BY-SA unless otherwise noted.