The Stampede ECS, also known as the Blazing Burst ECS in Japan, is an electronic clip system Nerf blaster. It was released on September 9th, 2010 under the N-Strike series. It requires six "D" batteries to be operated.

The Stampede is a battery-operated motorized direct plunger blaster. It does not feature an external priming mechanism. It features six tactical rails, the most of any current Nerf blaster. One is on top of the carrying handle/built-in iron sights, one is above the barrel, two are beneath the barrel, and the last two are on both the left and right sides of the main body. Any accessories mounted on the latter two or the carry handle are blocked when the included Blast Shield is attached above the barrel.

Like most blasters, the jam door is located on top of the Stampede, under the carry handle. It does not have a lock and can be opened at any time to remove jammed darts. Clip release buttons are located next to the trigger, on either side of the blaster. The power lever is on the left side of the trigger.

The Stampede is fully-automatic, but a single shot can be fired by pulling back the trigger for about a second due to its slow fire rate. The Stampede features a motorized direct plunger system, giving it a unique priming and firing style. Its internals push forward first. In doing so, the Streamline Dart to be fired is pushed into the breech and the blaster is primed simultaneously. The piston is then released to fire the dart using a mechanical equivalent of a slam fire trigger. A return spring (the visible black spring) resets the firing mechanism, letting a new dart rise up the clip.

It should be noted that because of its firing mechanism, darts that are not loaded perfectly will become damaged. Consistent use will result in darts missing small pieces on the rear. This does not seem to affect the blaster itself although it will affect accuracy.

The Stampede ECS is one of the heaviest Nerf blasters. Most of the weight is located at the rear of the blaster where the "D"-sized batteries are held, meaning that the center of gravity is backwards from standard firing position. This can be mitigated by adding weight to the front in the form of attachments, but will overall increase the weight.

Another solution is to use IMR batteries in 14500 format ("AA" size), fitted into converter shells. In addition to reducing rear weight, these will also provide an easy and convenient voltage upgrade, raising rate of fire.

One of the first sightings of the Stampede ECS came in May 2010, when a NerfHaven user posted an image of the prototype blaster, which then began to circulate on forums. It was compared to the fictitious Spartan NCS-12 from the Nerf N-Strike video game.[4]

The Stampede was the biggest release from Nerf in 2010. To help promote it, there was a blaster re-release campaign called the Clear Series.

The blaster was succeeded in 2013 by the N-Strike Elite Rapidstrike CS-18.

The Stampede was re-released in 2019 under the ICON Series to celebrate the fiftieth anniversary of the Nerf brand.

The Stampede ECS has been released in the following color schemes:

Voltage modification for this blaster is limited by its ability to mechanically fire, not the failure of its electrical parts. Recommended voltage is from 12 to 16 Volts, but overheating and jamming problems may occur more often when fired for too long. As the blaster uses a direct plunger system rather than a flywheel system, voltage modifications will only increase its rate of fire and not affect its range. 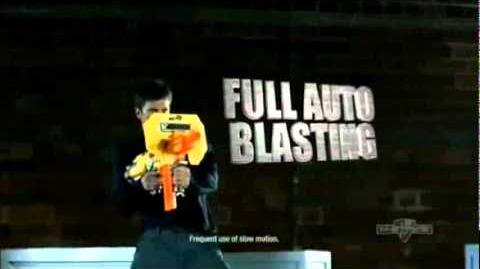 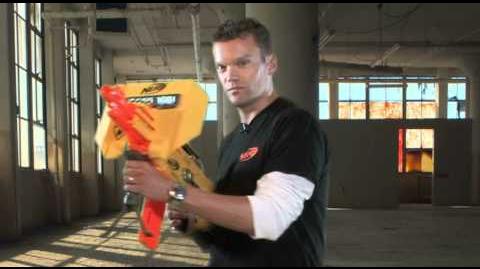