For information on the blaster's standard features, see Stalker.

Unlike other X-Shot Zombie blasters, the Stalker does not feature a boosted firing range compared to its standard counterpart.

It advertises a firing range of up to thirty-two feet (nine meters). 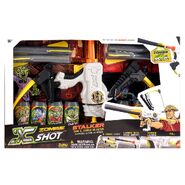 The packaging for the X-Shot Zombie Stalker.
Community content is available under CC-BY-SA unless otherwise noted.