The Spylight (known as the Starlight in Europe) is a Nerf blaster that was released in fall of 2014 under the Secrets & Spies sub-series.

The Spylight is a revolver-like blaster with a six-shot capacity in its cylinder, very similar to the N-Strike Elite Strongarm. It features one tactical rail, one strap point, and a hidden, pop-out compartment in the handle for storing two darts. Again like the Strongarm, it has a priming indicator visible at the rear of the slide, beneath the sling point; furthermore, it shares its cousin's slam fire ability.

The cylinder itself is clear and red, which allows the user to see any secret messages written on the loaded darts.

It advertises a firing range of up to seventy-five feet (twenty meters).[1] 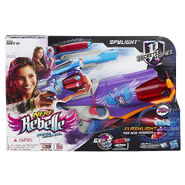 The packaging for the Spylight. 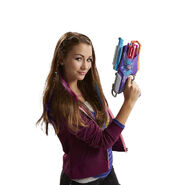 A Nerf model holding the Spylight. 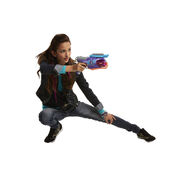 A Nerf model aiming the Spylight.
Add a photo to this gallery

Retrieved from "https://nerf.fandom.com/wiki/Spylight?oldid=188932"
Community content is available under CC-BY-SA unless otherwise noted.