The SplitStrike is a Nerf blaster that was released on August 1, 2015 under the N-Strike Elite series.

In the United States, it is a Walmart exclusive. In the Netherlands and Germany, it is only available at Intertoys stores.[citation needed]

The SplitStrike is a multi-fire direct plunger Nerf blaster that is able to hold four darts at a time. Its unique ability is that of being able to be split apart into two separate, fully functioning single-fire blasters: one blue and one white. A lock mechanism on the right, blue half allows the user to split the blaster apart.

It features the use of two intelligent air restrictors, similar to the Zombie Strike Doublestrike. The SplitStrike is complete with two priming rod handles, two side-by-side firing triggers, and four barrels. A single strap point is located behind this lip. Similar to the Firestrike, the SplitStrike has a "hook" at the bottom of its grip, used to aid in the priming of another Splitstrike while dual wielding.

The SplitStrike has been released with the following color schemes: 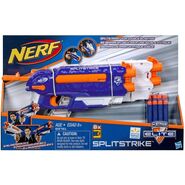 The packaging for the SplitStrike.

The back of the packaging for the SplitStrike.

A variant of the SplitStrike, with a white right blaster and a blue left blaster.
Community content is available under CC-BY-SA unless otherwise noted.
Advertisement