The Spectre REV-5 is a revolver Nerf blaster that was released in 2013 under the N-Strike Elite series.

It is a Walmart exclusive in the United States.[3]

Like the N-Strike Spectre REV-5, the Spectre is a slide-action revolver-style blaster with a five-dart cylinder that advances on the prime. Pulling the slide back when it is already primed will not rotate the cylinder again. This prevents jams that result in the incomplete turn of the cylinder.

The Spectre is compatible with detachable shoulder stocks and barrel extensions. There is a priming indicator built into the shoulder stock attachment point. A tactical rail sits atop the blaster.

This blaster was not designed for ambidextrous use. As such, some left-handed users may find its operation to be awkward. The Folding Stock that comes packaged with this blaster has a large hinge on the right hand side, which can get in the way while priming the blaster. However, this is remedied by simply unfolding or removing the stock. The revolving cylinder on this blaster flips out to the left, which may be awkward to reload if the user uses their right hand for reloading.

Unlike the original Spectre, the N-Strike Elite Spectre uses a direct plunger system. It also has a different air restrictor system than its N-Strike counterpart, using a one-door system similar to that seen in the Swarmfire and Strongarm.

The packaging for the Spectre REV-5. 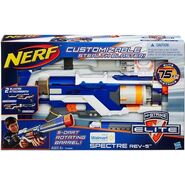 The Walmart-exclusive packaging for the Spectre REV-5.