The Spectre REV-5 (known as the Bone Revolve REV-5 in Japan) is a revolver Nerf blaster that was released in 2010 under the N-Strike series.

It comes packaged with a barrel extension, a Folding Stock, and five Whistler Darts.

The Spectre is exclusive to Walmart in the United States, Target in Australia, Asda in the United Kingdom, and Smyths in Ireland.[citation needed]

The Spectre is a revolver-style blaster with a small cylinder that holds up to five darts at a time. It has a tactical rail that is compatible with most accessories, as well as compatibility with detachable shoulder stocks. It also features a single attachment point for a sling or bandolier on the handle of the blaster.

This blaster was not designed for ambidextrous use. As such, some left-handed users may find its operation to be awkward. The Folding Stock that comes packaged with this blaster has a large hinge on the right hand side, which can get in the way while priming the blaster. However, this is remedied by simply unfolding or removing the stock. The revolving cylinder on this blaster flips out to the left, which may be awkward to reload if the user uses their right hand for reloading.

The Spectre was re-released into the N-Strike Elite series in 2013 with an upgrade to its internals to be able to fire the standard seventy-five feet that other N-Strike Elite blasters can fire.

The packaging for the Spectre REV-5. 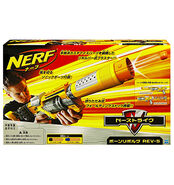 The Japanese packaging for the Bone Revolve REV-5.

The mock-up for the Whiteout Spectre.