The Space Agent is a Nerf Koosh ball blaster that was released in 2012 under the Koosh Galaxy series.

The Space Agent has the ability to curve its shots when fired. This is done by pressing a button in front of the firing trigger on either side the user wishes to curve the ball towards. It also features one sling point on the handle. Its ball storage tube can be used as a front grip. 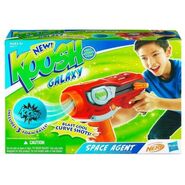 The packaging for the Space Agent.