The Solar Recon is a Nerf Koosh ball blaster that was released in 2012 under the Koosh Galaxy series. It requires four "AA" batteries to operate its glow-in-the-dark feature.

The Solar Recon features the ability to "charge" its glow-in-the-dark ammunition, much like the Nerf 2012 Light It Up series of blasters. It has two clip points for a sling or strap: one above the muzzle and one at the end of the blaster.

It uses a feeding tube for balls, similar to that of the Nerf 1995 Nerf Action Ripsaw and the 2004 Ball Blasters Buzzsaw. 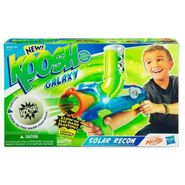 The packaging of the Solar Recon.