Not to be confused with the Air Warriors Snipe.

The Snipe is a Buzz Bee blaster that was released in 2015 under the Ultra-Tek sub-series.

It comes packaged with a detachable scope, a detachable barrel, an eight dart clip, eight Long Distance Darts, and instructions.

The Snipe is a clip-fed, bolt-action blaster. It features a scope that attaches to a top rail on the Snipe and a barrel extension that can be threaded on to the muzzle of the blaster.

Like other Ultra-Tek blasters, it is also compatible with Nerf clip system clips.

The Snipe has been released as the Master Tek with no changes to appearance or performance. It was later re-released under the Air Warriors series with updated internals.

The Snipe has been released with the following color schemes:

The green variant of the Snipe. 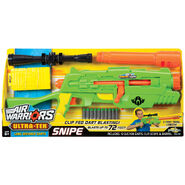 The packaging for the green Snipe. 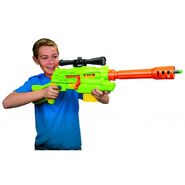 A model firing the Snipe.
Add a photo to this gallery

Retrieved from "https://nerf.fandom.com/wiki/Snipe?oldid=191819"
Community content is available under CC-BY-SA unless otherwise noted.