The Sneak Shot (known as the Corner Shooter outside the United States) is a single-fire Nerf blaster that was released in 1994 under the Nerf Action series.

The Sneak Shot was designed to fire from around corners; however, this feature sadly did not function as advertised and was very difficult to accurately operate.[2] It featured a rotating mirror and a barrel that could be manually angled left and right. The barrel is rotated through an orange gear at the bottom of the blaster. It was fired using a bolt, seen for the first time in a Nerf blaster alongside the Max Force Eagle Eye. Ammunition holders are found on the right side of the built-in stock.

The Sneak Shot was possibly inspired by the Kenner Softball Shooter, a toy which featured a very similar rotating barrel and mirror on the top of the blaster.

In some countries the Sneak Shot is known as the Corner Shooter. It is unknown when the blaster was discontinued although the blaster was seen at the latest in 1996 Kenner Action Guides. This could indicate a discontinuation sometime around or after then.

The packaging for the Sneak Shot. 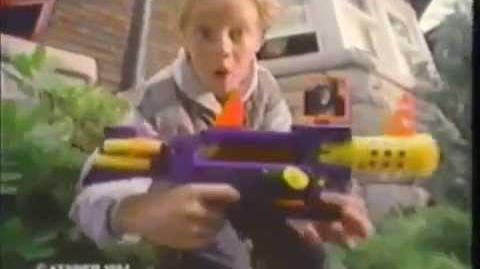