The SnapFire is a Nerf blaster that was released in spring of 2015 under the N-Strike series.

The SnapFire is a small blaster advertised as being a stealth pocket blaster. It operates in a very similar fashion to the Jolt EX-1 with the exception that it features an inline plunger, rather than it being built into the grip. It features dart storage below the muzzle which can store up to two extra darts.

The SnapFire was previously known as the Splinter until final production. This moniker can be identified through early Amazon listings (coincidentally still featuring the SnapFire logo on the blaster in picture).[1] In addition, an early description of the blaster also referred to it as the Splinter.[2] Considering the title was used until at least pre-production, it is unknown why the title was changed for the final release.

The SnapFire was discovered on Jauary 7, 2015, on the back of packaging for the DoubleDown in European Toys "R" Us stores.[3] It, alongside the DoubleDown and SharpFire, did not have a widespread release in Canada.[citation needed]

It was later re-released in 2016 in a three-pack that was categorized under the N-Strike Elite series.

The SnapFire has been released with the following color schemes:

The SnapFire features the use of a direct plunger system.

As a Jolt-based blaster, modification potential has a distinct ceiling. However, as the air restrictor is a separate piece not plastic-welded in place, it is a good option for cheap and simple mods such as banding [4] or spring substitution[5]. Nerfers who find the handle uncomfortable may choose to tape the handle to prevent the holes in the handle from irritating their hands. Barrel replacements are also possible ,in the same vein as a Jolt. 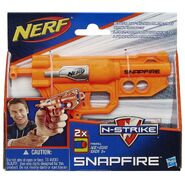 The packaging for the SnapFire. 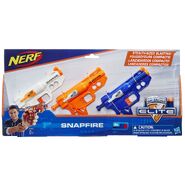 The packaging for the SnapFire 3-Pack. 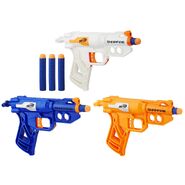