This is an article about the Adventure Force Sling Shot. For other uses, see Slingshot.

The Sling Shot is an Adventure Force blaster that was released in 2020.

As its name suggests, the Sling Shot is a slingshot-style blaster. It does not feature a firing trigger and fires them by pulling back on a plunger rod and letting go; an elastic cord helps with the firing process. The barrel that darts are fired from can be folded up when not in use.

It is a re-release of the Air Warriors Sling Shot. 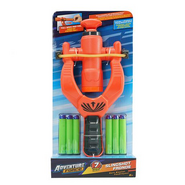 The packaging for the Sling Shot. 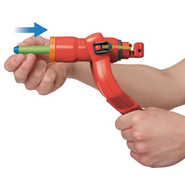 The Sling Shot being loaded.
Community content is available under CC-BY-SA unless otherwise noted.