The SlingStrike is a Nerf blaster that was released in 2015 under the N-Strike series.

It comes packaged with two Elite Darts and instructions.

The SlingStrike is a string-powered slingshot-style blaster; like other slingshot-style blasters, like the 1992 Slingshot, it fires darts instead of Ballistic Balls. Staying true to its slingshot design, it does not have a firing trigger. It features two dart holders, one on either side of the blaster. The SlingStrike has a mechanical lock that prevents the string from being pulled if there is no dart loaded.

Prototype renders of the SlingStrike were given the name Sling Shock.

There are multiple ways to modify this blaster, one being changing out the slingshot cord. It can be difficult to get a correct size and strength one, however. The locking mechanism can also be removed so that the plastic tab can be pulled back without a dart being loaded.

It has been advised not to remove the dart post as the darts will not easily align with the string during firing and will cause them to fishtail or fail to fire. 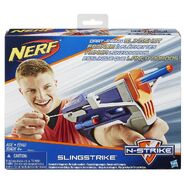 The packaging for the SlingStrike. 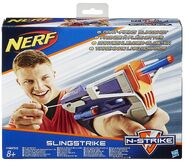 The European packaging for the SlingStrike. 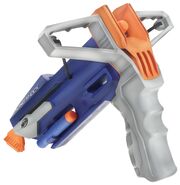 The Sling Shock, a prototype SlingStrike.