The Slambow is a BOOMco. blaster that was released in 2016.

The Slambow is a crossbow-like blaster that features bow arms that move back and forth as it is fired. Like many BOOMco. blasters, it lacks a firing trigger and instead uses a HAMP-firing style. Its turret rotates counter-clockwise when the priming mechanism is brought all the way forward. It features an accessory rail on top of the front most part of the blaster. On top of the back part is an integrated dart storage that holds up to eight additional darts.

The Slambow was re-released later in 2016 as the Amazonian Crossbow. 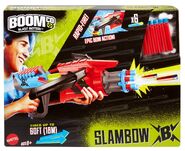 The packaging for the Slambow. 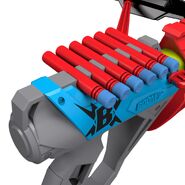 A 3D render of the Slambow's dart storage. 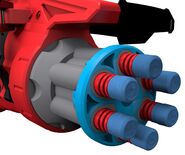 A 3D render of the Slambow's turret.
Add a photo to this gallery

Retrieved from "https://nerf.fandom.com/wiki/Slambow?oldid=199059"
Community content is available under CC-BY-SA unless otherwise noted.