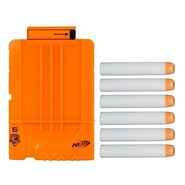 The N-Strike Modulus opaque six dart clip that comes with the Recon MKII and Mediator. It is also available for separate purchase on Amazon.
Add a photo to this gallery
Retrieved from "https://nerf.fandom.com/wiki/Six_dart_clip_(N-Strike_Elite)?oldid=165767"
Community content is available under CC-BY-SA unless otherwise noted.