The six dart clip, also known as the quick reload clip, is a Nerf dart clip.

As its name would suggest, it holds up to six Streamline Darts at a time. Any clip system blaster is compatible with this clip, and it is the most common form of clip. It is also compatible with Elite Darts.

As with all clips and drums, the six dart clip can actually fit one extra dart. However, this can make the blaster more prone to jamming, so it is highly recommended that users only put in six darts at once.

It was introduced in 2006 with the release of the Longshot CS-6. Early clips were yellow in color. When the Recon CS-6 was released, the color changed to orange.

The six dart clip made its last appearance in 2015 with the Elite Repaint Longshot CS-6 and with the Alpha Trooper CS-6 Mission Kit.

Before Nerf made the twelve dart clip, some modders would link two six dart clips together to make a twelve dart clip. This involved cutting the top of one, and the bottom of another, linking the springs and gluing them together.[1] 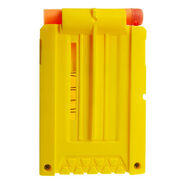 The yellow six dart clip. Note how the dart in this image is loaded backwards, as the clip's release notch is facing the same direction as the dart.