The Single Tek is a Buzz Bee blaster that was released between 2003 and 2004 under the Ruff Stuff Air Blasters series.

It comes packaged in the Twin Tek blaster set. It was later released by itself and came packaged with five Micro Darts.

The Single Tek is a single-fire dart blaster. It has an integrated storage for three darts under the blaster's muzzle.

It advertises a firing range of up to (twenty-five feet (seven meters).

The Single Tek was reshelled as the 2005 Laser Tek. It was re-released as a standalone blaster in 2005, as well as an Air Blasters blaster in 2008.

The Single Tek has been released with the following color schemes: 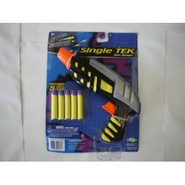 The Ruff Stuff Air Blasters packaging for the Single Tek.

The Air Blasters packaging for the Single Tek.
Add a photo to this gallery

Retrieved from "https://nerf.fandom.com/wiki/Single_Tek?oldid=188562"
Community content is available under CC-BY-SA unless otherwise noted.