Not to be confused with the Buzz Bee Side Winder.

The Sidewinder is a X-Shot blaster that was released in 2011.

The Sidewinder is a HAMP-style blaster that fires both darts and water. Water is not contained in a blaster, as it lacks a reservoir, requiring it to be dipped in water to load it in.

It features a nine dart turret. The blaster uses a similar air system to the Buzz Bee Air Tek 8, which has led some to believe it was inspired by it. On the top of the blaster is a makeshift accessory rail, although no accessories have been released in the X-Shot line that would be compatible with said rail. The blaster features an iron sight on the top, which lines up with the rail.

This blaster was one of the first three blasters to be released under the X-Shot line in 2011, alongside the Stealth and Thundershot.

The Sidewinder was planned to be re-released in 2012, as an updated version that would fire X-Shot Discs, similarly to the Dual and Turbo-Fire. This was seemingly cancelled by Zuru.

In late 2013, three new X-Shot lines were introduced (X-Shot Excel, X-Shot Pink Series, and X-Shot Zombie), consisting of some re-released versions of previous X-Shot blasters as well as new blasters. The Sidewinder was one of the few blasters not to make an appearance in any of the lines. 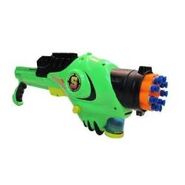 The prototype version of the disc-firing Sidewinder. 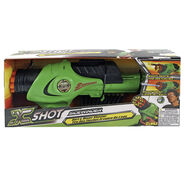 The packaging of the Sidewinder.
Community content is available under CC-BY-SA unless otherwise noted.
Advertisement