Not to be confused with the Zuru blaster of the same name.

The Side Winder is a Buzz Bee blaster that was released in 2013 under the Air Warriors series.

The Side Winder is a blaster that uses a variation of HAMP-action similar to slam fire to fire. It comes with a removable thirty dart drum which is currently not compatible with any other blasters. While it may appear to have a firing trigger, the trigger itself is non-functional and is instead a false trigger; while not highly noticeable on the green color scheme of the blaster, this is very evident on the blue color scheme variant. A jam door is found on the left side of the blaster to help in the event of a jam.

An interesting feature of the blaster is its firing mechanism, which does not rely on spring or air power to fire.[1] Instead, the priming mechanism also acts as a plunger, and upon reaching the farthest back position, the Side Winder will fire.

The title Side Winder had been trademarked by Buzz Bee Toys in August of 2013.[2] Despite this, it had been previously seen in stores just a month earlier.[3]

This blaster was spotted in a green color scheme sometime in 2014. This particular variant (and all re-releases onward) renamed the blaster to Sidewinder, removing the added space seen with the original blue variant.

It was re-released in 2015 under the Ultra-Tek sub-series, with this new name, slightly redesigned to chamber the longer Long Distance Dart. The shell also underwent some changes, most notably the introduction of a carry handle.

The Side Winder has been released with the following color schemes: 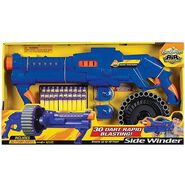 The packaging for the Side Winder.

The packaging for the Sidewinder.
Add a photo to this gallery

Retrieved from "https://nerf.fandom.com/wiki/Side_Winder?oldid=193441"
Community content is available under CC-BY-SA unless otherwise noted.