watch 03:19
Wiki Targeted (Games)
Do you like this video?
Play Sound

Not to be confused with the Dart Tag Sharp Shot.

The Sharpshooter is a Nerf blaster that was released in 1992 under the Original Nerf name.

The Sharpshooter is a spring-powered dart blaster and is the only blaster to use Sharpshooter Darts. It features an area on the top of the blaster to rest one's hand, which bears a strong resemblance to a priming slide, although no blasters at the time of its release used slides. There are two integrated dart holders on top of the blaster. The integrated dart holders may also double as a built-in iron sight if one looks down the middle of the dart holders.

The Sharpshooter was the first blaster to utilize a number of now-standard conventions, such as a priming slide with a ring (later used by blasters such as the Secret Shot, Defender T3, Tech Target Eliminator, Nite Finder, and Element EX-6), a proper plunger system, and a firing trigger. It was also the first Nerf blaster to use any form of dart-based ammunition.[1]

The Sharpshooter was discontinued in 1995[4]. It was succeeded that year by the Nerf Action series Sharpshooter II, which featured a better rate of fire and capacity.

The Sharpshooter has been released in the following color schemes:

The packaging of the Sharpshooter, likely a later model due to the lack of Sharpshooter Darts.

A look down the Sharpshooter's muzzle and barrel.
Add a photo to this gallery 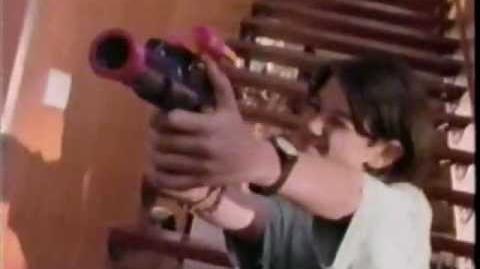 1994 Kenner Nerf Sharpshooter Commercial
Add a photo to this gallery

Retrieved from "https://nerf.fandom.com/wiki/Sharpshooter?oldid=206253"
Community content is available under CC-BY-SA unless otherwise noted.