The Sharp Shot is a Nerf blaster that was released in 2011 under the Dart Tag series.

The Sharp Shot is a single-fire blaster that holds a single dart at a time. Up to three additional darts can be stored in its integrated ammo storage. Its priming mechanism is similar to that of the Scout IX-3 and Maverick REV-6. The Sharp Shot's funnel-shaped muzzle is beveled for quick and easy frontal dart loading necessary for the fast-paced game of Dart Tag. It features a single iron sight located on the front barrel.

The detachable plastic carabiner is made of strong plastic that has a quick release ball and socket joint. The correct way to use the belt clip is by aligning the ball-joint to the cut on the other clip and pulling the blaster quickly in that direction.

It was re-released in 2012 with a blue trigger similar to the Speedswarm's and a blue dart holder. This re-release saw changes to the internals, which improved the performance of the blaster; this version featured a much more powerful spring.[2]

The Sharp Shot is packaged in two blaster sets: the 1-Player Pack and the 2-Player Starter Pack. 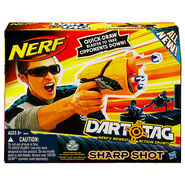 The packaging of the Sharp Shot. 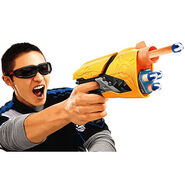 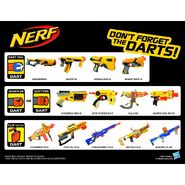 A Nerf ammunition compatibility chart, with the Sharp Shot incorrectly labeled as the "Sharp Shot 6".
Add a photo to this gallery

Retrieved from "https://nerf.fandom.com/wiki/Sharp_Shot?oldid=205599"
Community content is available under CC-BY-SA unless otherwise noted.