Nerf Wiki
Register
Don't have an account?
Sign In
Advertisement
in: Articles with speculation, Hasbro blasters, Nerf blasters,
and 4 more

The Shark Seeker is a Nerf blaster that was released in August of 2021 to promote the video game platform Roblox.

It comes packaged with three Mega Darts, a promotional code, and instructions.

The Shark Seeker is a single-fire blaster based on the Godly-rarity Shark weapon from Roblox game Murder Mystery 2 with the ingame weapon being based on the Land Shark Shooter gear. The blaster uses an intelligent air restrictor system similar to that of N-Strike Mega Tri-Break and AccuStrike Bulldog. The top fin acts as a priming slide.

The Shark Seeker was first leaked in early 2021 through online listings. It was later announced on April 13, 2021.[1]

The packaging for the Shark Seeker.

The back of the packaging for the Shark Seeker. 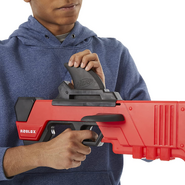 The Shark Seeker being primed. 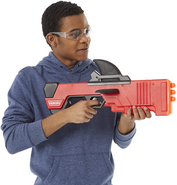 A model firing the Shark Seeker.