The Sergeant Jyn Erso Deluxe Blaster is a Nerf blaster that was released in fall of 2016 under the GlowStrike series to promote the film Rogue One: A Star Wars Story. It requires four "AA" batteries to be operated.

The Sergeant Jyn Erso Deluxe Blaster is a battery-operated flywheel clip system blaster, similar to the N-Strike Modulus Modulus ECS-10 or the N-Strike Elite Stryfe. It features compatability with some barrel extensions and detachable shoulder stocks, and one tactical rail. When the acceleration trigger is pulled, the blaster's dart charging light activates. When the firing trigger is pulled, it also emits a sound and the top-front of the blaster lights up.

Although the blaster is nominally compatible with barrel extensions, the lack of a locking dimple, combined with the location of the positioning grooves on the barrel, mean that in practice, only extensions that lock to the barrel itself (e.g. the Spectre barrel extension) are stable. 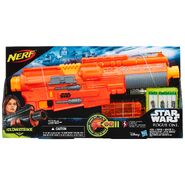 The packaging for the Sergeant Jyn Erso Deluxe Blaster. 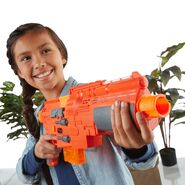 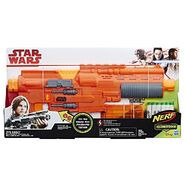