The Sentry is a Buzz Bee blaster that was released in 2017 under the Air Warriors series.

The Sentry is a slide-action blaster that holds up to two darts at once in its muzzle. The barrels auto-advance via rotating plunger system inside the blaster.

The Sentry was first shown off at the 2017 Toy Fair.

A later re-release of the Sentry packaged it with Long Distance Darts, rather than Precise Pro Darts. 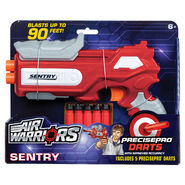 The packaging for the Sentry. 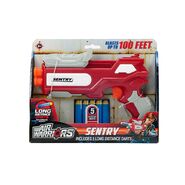 The updated packaging for the Sentry, packaged with Long Distance Darts.
Add a photo to this gallery

Retrieved from "https://nerf.fandom.com/wiki/Sentry?oldid=188454"
Community content is available under CC-BY-SA unless otherwise noted.