The Secret Strike AS-1 is an air system Nerf blaster that was released in 2004 under the N-Strike series.

It comes packaged with two Micro Darts and a cardboard target.

The Secret Strike AS-1 is a very small air-powered blaster; its pump is located under the muzzle of the blaster. It does not have a tactical rail mainly due to its size. Instead of a trigger, this blaster features a firing button, which is located on top of the blaster. It comes with a belt clip attached to its bottom so that a person may clip to their belt. It does not feature a conventional handle, including a small section to rest one's hand against instead.

The blaster was sold at most stores until around 2011, when stock became limited in order to accommodate for the similarly-priced Jolt EX-1.

The Secret Strike AS-1 has been released in the following color schemes:

To reload the Secret Strike AS-1, load a dart into the muzzle.

Pump up to five times then press the firing button at the top of the blaster to fire.

A common misconception is that users may be able to increase firing power by pumping more than ten times, however this causes the blaster to be heavily prone to air tank damage. The damage caused by overpumping usually results in air pressure from pumping quickly escaping or inability to put a significant amount of pressure in the blaster. As a result, the blaster will no longer be able to fire at the same potential range it would receive otherwise. Because of this, it is not recommended to pump the blaster over five times. 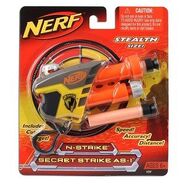 An older variation of the Secret Strike AS-1's packaging. 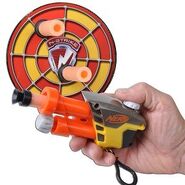 The Secret Strike AS-1 and its old cut-out target.
Add a photo to this gallery

Start a Discussion Discussions about Secret Strike AS-1