Not to be confused with the N-Strike Scout IX-3 or the Zombie Strike Sidestrike's prototype name.

The Scout MKII is a Nerf blaster that was released in fall of 2018 under the N-Strike Elite series.

The Scout MKII is a single-fire revolver that shares many similarities with the AccuStrike Quadrant. It features a tactical rail on the top, as well as a hand guard and a small grip area at the front. Its cylinder holds up to four darts, making its capacity on the lower end for most revolvers.

The Scout MKII was produced in India.[1] It was originally announced at the 2018 Toy Fair. 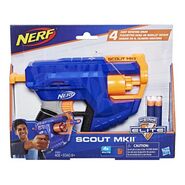 The packaging for the Scout MKII. 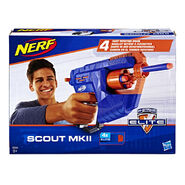 The European packaging for the Scout MKII.

The Scout's tactical rail, compared to the Quadrot's.