Not to be confused with the N-Strike Elite Scout MKII or the Zombie Strike Sidestrike's prototype name.

The Scout IX-3 is an internal mechanism Nerf blaster that was released in 2003 under the N-Strike series.

It comes packaged in the Unity Power System blaster set.

The Scout uses a priming slide similar to the Maverick REV-6, yet loads from the muzzle like a Nite Finder EX-3 or Element EX-6.

The Scout features a tactical rail and storage for two extra darts. A button on the slide enables the blaster to be fired by a button on the Titan AS-V.1 when connected as part of the Unity Power System.

The Scout was one of the first blasters to be released under the N-Strike series. It first came packaged in the Unity Power System, along with the Hornet AS-6, and the Titan AS-V.1.

It was re-released again 2011, this time as a standard, single-blaster, as well as a two-pack.

It was spiritually succeeded by the 2014 Zombie Strike Sidestrike.

The Scout has been released with the following color schemes: 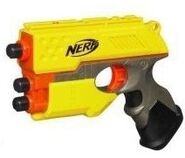