The Scorpion Gatling Blaster is a battery-operated, belt-fed, automatic flywheel blaster with a long set of barrels that spin as it is fired. It features a built-in carry handle, which can be folded up for storage. The power switch for the flywheels is located on the left side of the blaster. The belt advances counter-clockwise as darts are fired.

It advertises a firing range of up to seventy feet (twenty-one meters), and a rate of fire of one dart per second.

The Scorpion Gatling Blaster was re-released back into the Dart Zone brand as the Scorpion Commander, with a boosted firing range. 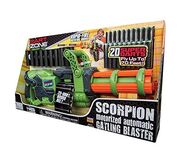 The packaging for the Scorpion Motorized Automatic Gatling Blaster. 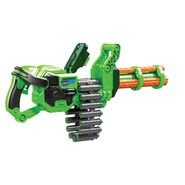 The Scorpion with its breech lid open.

A model firing the Scorpion.
Add a photo to this gallery

Retrieved from "https://nerf.fandom.com/wiki/Scorpion_Motorized_Automatic_Gatling_Blaster?oldid=190134"
Community content is available under CC-BY-SA unless otherwise noted.