Not to be confused with the accessory type of the same name.

The Scope is a Zuru blaster that was released in 2013 under the X-Shot Excel.

The Scope is a large single-fire blaster, about the size of the Vigilante. Although the blaster is very large in size, it cannot hold more than one dart at the time.

The X-Shot Excel Scope was released alongside an X-Shot Zombie variant.

The Scope would be re-released back into the standard X-Shot line as the Hawk Eye.

To reload the Scope, simply press the orange piece at the back of the blaster to unlock the loading mechanism. Insert one dart into the blaster and close it. Pull the handle at the front unit until a click is heard, and release forward.

Pull the trigger for firing a dart. 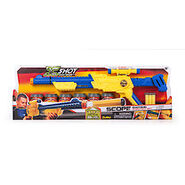 The packaging for the X-Shot Excel Scope. 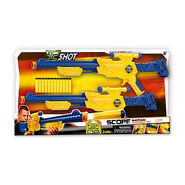 The packaging for the Shotgun Shootout Set.