The SMG-L is a Nerf blaster that was released in 2021 to promote the video game Fortnite. It requires four "AA" batteries to operate.

The SMG-L is unavailable in the United States.

The SMG-L is a flywheel clip system blaster that functions similar to that of the N-Strike Elite Stryfe. It is based on the Submachine Gun from the video game, and is predominantly yellow in color, reflecting its "Legendary" rarity. 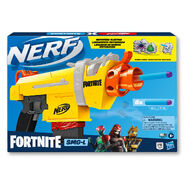 The packaging for the SMG-L. 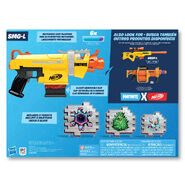 The back of the packaging for the SMG-L.

The targets included with the SMG-L.
Community content is available under CC-BY-SA unless otherwise noted.
Advertisement