The SMG-E is a Nerf blaster that was released on January 1st, 2020 to promote the video game Fortnite. It requires four "AA" batteries to operate.

It comes packaged with a six dart clip, six Fortnite Darts, and instructions.

The SMG-E was first leaked on Brickseek as the SMG. It was later found listed on the Hasbro fansite Hasbro Pulse. The packaging for the SMG-E. 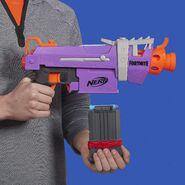 The SMG-E being loaded with its included clip. 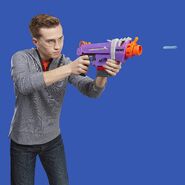 A model firing the SMG-E.