The Rukkus ICS-8 is an indexing clip system Nerf blaster that was released on January 1st, 2019 under the N-Strike Elite series.

The Rukkus features an auto-indexing clip system similar to the Battlescout ICS-10. However, unlike the Battlescout's clip, the clip is non-removable. The clip can hold up to eight darts. The blaster's priming slide is located on top of the blaster, and bears similarity to the Delta Trooper. The blaster also has slam fire.

The Rukkus was first leaked and discovered online on September 4, 2018. It was shown off at the 2019 Toy Fair.

The packaging for the Rukkus ICS-8. 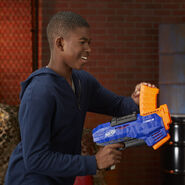 A Nerf model holding the Rukkus.

A render of the Rukkus ICS-8.

A promotional image of the Rukkus ICS-8. In reality, since the image shows off the left side of the blaster, screw ports would also be visible.
Add a photo to this gallery

Retrieved from "https://nerf.fandom.com/wiki/Rukkus_ICS-8?oldid=188365"
Community content is available under CC-BY-SA unless otherwise noted.