The RotoTrack is a Nerf blaster that was released in 1997 under the Cyber Stryke Gear series.

It comes packaged with a twelve dart chain, twelve Mega Darts, and instructions.

The RotoTrack is a single-fire, chain-fed blaster. Like the Cyber Stryke Gear Strongarm, it has the ability to be worn on the user's arm via a strap under the blaster.[2] It does not feature the use of a firing trigger, and is fired simply by pulling back the priming handle on the left side of the blaster.

Since the priming handle is located on the left of the blaster, the RotoTrack is not recommended for left-handed Nerfers.

The RotoTrack is a great improvement of the 1994 Nerf Action Chainblazer, and solved most of the problems that the Chainblazer suffered from. It included a higher capacity chain and was more reliable than the Chainblazer.

The packaging for the RotoTrack.

A fully-assembled RotoTrack and its packaging.

The RotoTrack, without a chain loaded in it.

The RotoTrack in a 1998 Mega Blitz advertisement.
Add a photo to this gallery 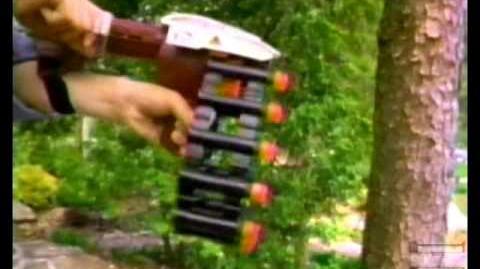 RotoTrack Commercial
Add a photo to this gallery

Retrieved from "https://nerf.fandom.com/wiki/RotoTrack?oldid=200555"
Community content is available under CC-BY-SA unless otherwise noted.