The Ripshot is a Nerf blaster that was released in 2014 under the Zombie Strike series.

It comes packaged with three XLR Discs and instructions.

The Ripshot is a single-shot disc blaster that features no tactical rails, a sling point above its muzzle, and a disc storage space for up to three discs under its muzzle. Discs are loaded in a similar fashion to the Proton and Ricochet. There is a jam release switch on the top of the priming mechanism. A built-in sight is seen at the top of the blaster.

It it advertised as a "stealthy" blaster.

The Ripshot was first revealed at the 2013 Toy Fair along with the entire 2014 Zombie Strike line. The differences between the prototype model and the finalized production model mostly came down to color swaps and logo changes; for the most part, no major changes were made. 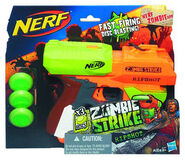 The packaging for the Ripshot.

The prototype of the Ripshot, featuring a darker color scheme.
Add a photo to this gallery

Retrieved from "https://nerf.fandom.com/wiki/Ripshot?oldid=188333"
Community content is available under CC-BY-SA unless otherwise noted.