The Rifle Blaster is a Dart Zone blaster that was released in summer of 2020.

The Rifle Blaster is a small break-open, pump-action blaster with a single barrel.

The blaster features an integrated dart storage for four darts in its shoulder stock, as well as a removable scope accessory. The break-away barrel does not prime the blaster. 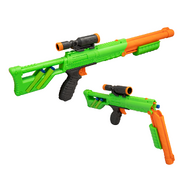 The Rifle Blaster's back and open dart chamber. 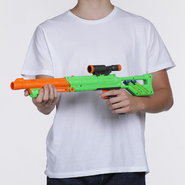 A model holding the Rifle Blaster.
Community content is available under CC-BY-SA unless otherwise noted.