The Ricochet is a Nerf blaster that was released in 2014 under the Zombie Strike series.

The Ricochet is a small single-shot disc blaster. A single disc loads into the blaster by the muzzle. A set of iron sights are built into the muzzle and priming slide.

The blaster notably cannot be primed unless a disc is loaded in.

The Ricochet was first revealed at the 2013 New York Toy Fair, along with the entire 2014 Zombie Strike line.

Unlike other Vortex-style disc blasters, the Ricochet has a simple spring in it, rather than a torsion spring. 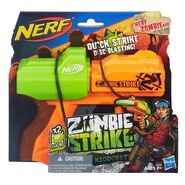 The packaging for the Ricochet.
Add a photo to this gallery

Retrieved from "https://nerf.fandom.com/wiki/Ricochet?oldid=211258"
Community content is available under CC-BY-SA unless otherwise noted.