The Rhino-Fire is a Nerf blaster that was released on November 14, 2014 under the N-Strike Elite series. It requires six "D" batteries to be operated.

The Rhino-Fire is a clip system blaster that features the ability to use two clips or drums at a time. It has two barrels which alternately fire. The barrels also collapse one after another when firing.

It features four tactical rails on top of the blaster: one tactical rail on each of the clip wells, and two in the middle of the blaster. The two rails in the middle have been merged into a single rail, which has two rail teeth. As a result, it can hold two different attachments as long as said attachments do not interfere with each other. The Rhino-Fire is one of the few blasters to feature a rail like this.

The bottom of the blaster features an attachment lug for mounting tripods. This lug is compatible with its included tripod, and can also accept the Vulcan tripod. The blaster also has two strap points at the start of each barrel. The clip release is located on the back of each clip well, similar to those found on a Rampage or Raider CS-35.

The firing trigger is in the form of a large, orange button on the top of the spade grip located at the back of the blaster. The button doubles as an acceleration trigger, where pushing it halfway will rev up the flywheels, while holding it down all the way will actually fire darts.

The Rhino-Fire has electronic locks that will only allow the blaster to fire if two clips or drums are inserted.

It is advertising a firing range of up to ninety feet (twenty-seven meters).

The Rhino-Fire released as a Wal-Mart exclusive during the 2014 holiday season in the United States.

It may be intended as a spiritual successor to the Vulcan EBF-25 as both blasters feature tri-pods and high dart capacity.

The Rhino-Fire was spiritually succeeded by the N-Strike Elite Titan CS-50. This is evident from the moving barrel and fifty dart capacity.

The Rhino-Fire has been released with the following color schemes:

A value pack was released for the Rhino-Fire in winter of 2015, packaged with two extra twenty-five dart drums, fifty extra darts, and six pre-packaged "D" batteries. The Rhino-Fire included in this pack is the blue variant; this is the only way to obtain the blue Rhino-Fire. This blaster set is exclusive to Costco Wholesale stores in the United States.[citation needed] 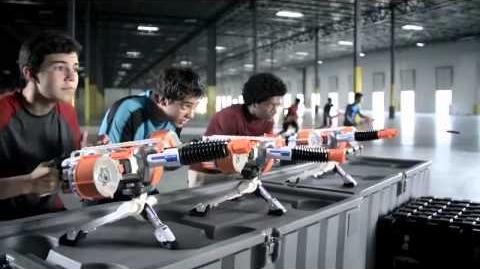 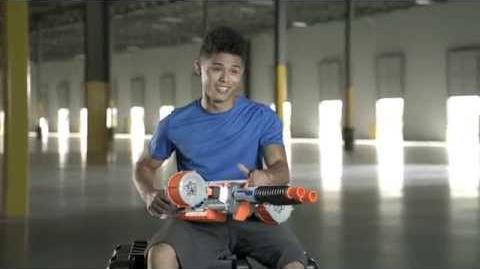