The Revoltinator is a Nerf blaster that was released in fall of 2019 under the Power Shock sub-series. It requires four "AA" batteries to be operated.

The Revoltinator is a large clip system flywheel blaster, bearing slight resemblance to the Stampede ECS. It features an integrated shoulder stock, as well as two tactical rails: one on top of the carry handle and the other underneath of the barrel. It is compatible with barrel extensions. The clip release is in front of the firing trigger. The jam door is located on the left of the blaster above the clip. Strangely, the door seems to only open halfway to allow access.

The part that connects the carry handle with the rest of the blaster is made of a slightly rubberized plastic, allowing the carry handle able to flex a few degrees from side to side.[1] Whether this was intentional or a design oversight is unknown.

A few LEDs in a circular array are located above the trigger, and when the acceleration trigger is pressed, the LEDs will light up in a "spinning" circular pattern, and they spin faster the longer the flywheels are being revved. This can function as a flywheel speed indicator, in addition to the audible sound flywheels make. It also features the ability to make sounds resembling sparking and blasting. 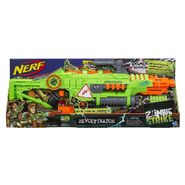 The packaging for the Revoltinator. 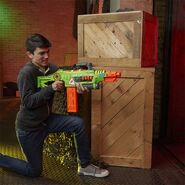 A Nerf model holding the Revoltinator.

A 3D render of the Revoltinator.

A promotional image for the Revoltinator.