The Retaliator is a Nerf blaster that was released on August 1, 2012 under the N-Strike Elite series.

It comes packaged with a barrel extension, a shoulder stock, an Assault Grip, twelve Elite Darts, a twelve dart clip, and instructions.

The Retaliator is a slide-action clip system blaster advertised as a "4-in-1" blaster. Using the included accessories, the Retaliator can be customized to the user's desire, allowing them to create their own blaster.

It features one tactical rail on its priming slide; when the included barrel extension is equipped, however, it has two additional rails, one on top and one below. A single dart can be stored in its handle, like the Recon CS-6. It has barrel extension and detachable shoulder stock attachment points, the latter of which having an integrated priming indicator for when the blaster is primed and ready for use. Due to the way the included stock attachment is designed, this indicator is not covered when it is equipped. It also features a sling mount in the handle.

The shoulder stock included with the Demolisher 2-In-1 will not fit on this blaster. This is due to the fact that the Demolisher stock does not have space to accommodate the extended plunger tube.

The Retaliator is a direct successor to the 2008 N-Strike Recon CS-6. The barrel extension is the exact same as the Recon's, the two main differences being its new color scheme and the addition of clockwise rifling.

It was re-released in 2014 with improved Elite XD internals and a white, blue, grey, and orange color scheme; this re-release was shown off at the 2014 Toy Fair.

The Retaliator was succeeded by the 2016 N-Strike Modulus Recon MKII and 2018 N-Strike Elite Delta Trooper.

The Retaliator has been released with the following color schemes:

Some find that the overhand priming slide negates the intended comfort of the included Assault Grip, since repeatedly moving one's hand back and forth between shots is unergonomic and unstable. To counteract this, several third-party vendors since 2016 have devised underhand pump grip kits which mimic the Alpha Trooper. These allow the hand to both support and prime the blaster without having to change position.

There is also a Double Your Darts value pack including the "economy" version of the Retaliator and twenty-four darts. 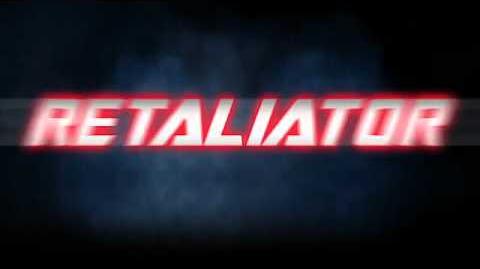