5-7 darts per second
The Regulator is a Nerf blaster that was released in August of 2017[1] under the N-Strike Modulus series. It requires four "C" batteries to be operated.

The Regulator is a flywheel clip system blaster. It is unique in that it features "SwitchFire Technology" that allows the blaster to be fired between three firing modes: a semi-automatic mode, a fully-automatic mode, and a "burst mode" that fires three darts one after the other. This is achieved by using a switch dial located in front of the firing trigger. The clip release button is located in front of the firing trigger, rather than next to the clip well. A jam door allows for access to the internals in order to clear dart jams. Unlike other jam doors, this one has a latch which locks it in place for safe use; this must be shut all the way and locked in order for the blaster to fire. Additionally, the blaster has an LED light atop the back-most iron sight that flashes to signify when a loaded clip is empty.

It features compatibility with detachable shoulder stocks and barrel extensions. A set of iron sights are built atop the blaster. It also has two tactical rails, one on top of the blaster and one under the muzzle. The core blaster has two sling mounts, built into the iron sights; an additional one can be added by attaching the included shoulder stock.

The Regulator was officially announced on January 30 of 2017.[2]

The Regulator features the use of a conveyor system to deliver darts through the flywheels, similar to the N-Strike Elite HyperFire. This, combined with lag from the electronics, can create a substantial delay in firing, meaning that the semi-automatic firing mode does not have the instantaneous response that other semi-auto flywheel blasters have. Sometimes the conveyor belt can also slip, leading to a reduced rate of fire and sometimes jams or malfunctions. The flywheels are also canted, like the HyperFire, which induces a rifling effect on fired darts.

The Regulator is one of the hardest blasters to modify with a LiPo battery[citation needed]; if done, however, the rate of fire on the full auto firing mode will increase greatly. 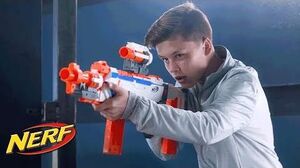