The Reflex Revolver TK-6 is an X-Shot blaster that was released in 2016.

The Reflex Revolver is a revolver-style blaster, with an auto-advancing cylinder that holds up to six darts at a time.

It advertises a firing range of up to fifty-five feet (sixteens meters).

The Reflex Revolver had an alternate release, as the Rapid Fury, which had downgraded performance. It would be later re-released as the Reflex 6, this time featuring upgraded internals.

The packaging for the Reflex Revolver. 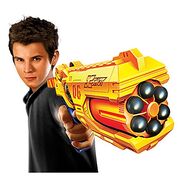 Artwork depicting the Reflex Revolver being aimed.
Add a photo to this gallery
Retrieved from "https://nerf.fandom.com/wiki/Reflex_Revolver_TK-6?oldid=196238"
Community content is available under CC-BY-SA unless otherwise noted.