Not to be confused with its original counterpart.

The Reflex 6 is an X-Shot blaster that was released in 2018.

The Reflex 6 is a small revolver with a single-fire priming rod, akin more to that of a Nerf Firestrike than a Strongarm or a Hammershot. It features a six dart cylinder that auto-advances. It features a set of iron sights atop the blaster.

The Reflex 6 is the successor to the the 2016 Reflex Revolver TK-6.

It was re-released into the Adventure Force brand as the Destroyer.

In Germany, it was released under the Playtive brand with two new color schemes.

Reflex 6 has been released with the following color schemes: 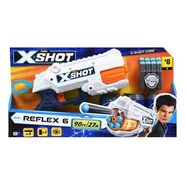 The packaging for the Reflex 6.

The Playtive red, gray, light blue, and orange Reflex 6.
Add a photo to this gallery
Retrieved from "https://nerf.fandom.com/wiki/Reflex_6_(2018)?oldid=206141"
Community content is available under CC-BY-SA unless otherwise noted.