Not to be confused with the Recon CS-6 barrel extension.

It comes packaged with the Recon MKII and the Recon CQ-12, and can be purchased separately on Amazon.

The rail has no connection point to snap in the attachments, making it more likely that accessories may fall off without force applied when equipping them.

The Recon MKII barrel extension has been released under the following color schemes: 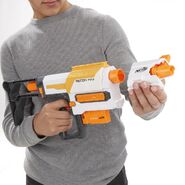 The Recon CQ-12's barrel extension.
Add a photo to this gallery

Retrieved from "https://nerf.fandom.com/wiki/Recon_MKII_barrel_extension?oldid=188051"
Community content is available under CC-BY-SA unless otherwise noted.